My parents came to Canada as refugees in the late ’80s for better opportunities and to escape Ethiopia’s dictatorship. Though I cannot know the extent of their struggles, I can speak of their consequences—if they knew how their long hours at work would make me less habesha and more feringhee, would they have done anything differently? As my parents worked, I was partially raised by the local YMCA. A black dot in a white sea. The more time I spent away from my parents, the less time I had to form my identity as both an Ethiopian and Canadian.

The more time I spent away from my parents, the less time I had to form my identity as both an Ethiopian and Canadian. I’d never learned how to speak Amharic, except for a few phrases, and this has been the greatest barrier between me and my extended family. When my grandparents would call, the only words we’d exchange were greetings. “Selam, in dem ineh,” they’d ask. “De nah,” I’d slowly respond, embarrassed by inability to carry the conversation further, quickly tosssing the phone back to my parents. Until I was about eighteen, I’d never really given much thought to what I was missing.

When my mother called me on a Wednesday night, I could sense she was about to tell me something terrible—she worked most weeknights. When she told me that my grandfather had died, I sighed in relief. This man was virtually a stranger to me, but as we spoke, I slowly realized that I no longer had any living grandparents. Gone were the people who shaped my parents and, by extension, me. They were strangers I was inextricably linked to for life. Strangers with secrets, full lives lived, hardships and imperfections. My apathy quickly turned to tears. A wave of guilt washed over me, and I asked myself, “Who was I to cry? Could I grieve for a stranger?”

The last time I saw my grandfather was when my grandmother passed away. My mother, father, brother and I hopped on a plane a week after we heard the news. Now, I have only seen my father express emotion a handful of times. But the day we visited my grandmother’s grave, I saw my father break down and fall into the arms of his brother. I could sense his guilt radiating as my aunties and uncles wailed.

Like my father, my grandfather, Mukria, worked very hard and spent most days away from home. Mukria looked like my dad, but thinner and darker. He walked with a cane and wore a large black trench coat that seemed a few sizes too big. I like to think he must have been artistic in some way, as it would explain why my father is such an amazing artist. Mukria was very quiet and his voice had a wise timbre, although my interactions with him were minimal to say the least, because he spoke not a single word of English. Like our phone conversations, the short time I had with him consisted of hello how are you’s and ended at that. In person, all I could do was give him a hug and sit in silence as everyone else around me had conversations in Amharic over tuj and kitfo.

In person, all I could do was give him a hug and sit in silence as everyone else around me had conversations in Amharic over tuj and kitfo. 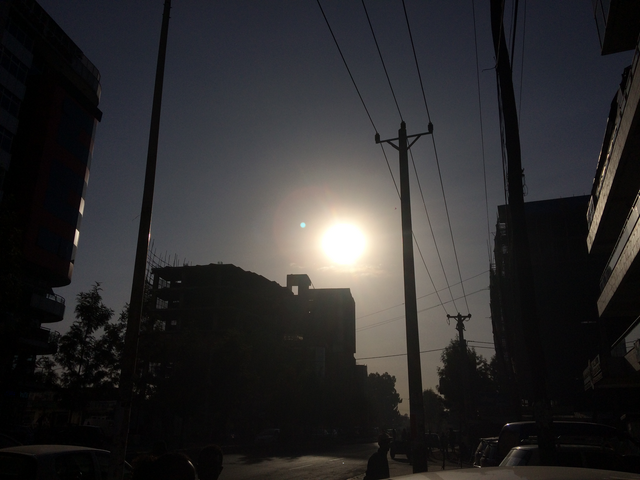 It feels impossible for me now to even begin to imagine the life of my grandparents, or even my extended family, but I have this dream to buy a ticket to Ethiopia after I graduate. I want to spend a year there, learning about my family and my roots. I cannot begin to fully understand who I am if I let the histories of my ancestors live and die in the past. The loss of my grandfather reminded me that the roots of my ancestors deserve to continue growing, as they have survived and given too much to be left to wither. Until I get the chance to buy that ticket, I’ll continue to nourish these roots deep within, to ensure they won’t grow weak awaiting reunion with the burnt red soil from which they came.